The ‘throwback’ designs, inspired by the colors made famous from Brumos Racing and Bob Akin Motor Racing, were the result of months of work put in behind the scenes from Porsche and its partners, according to two of the company’s North America marketing managers that were part of the driving force behind the initiative.

Scott Bartlett, manager of motorsports & driving events and Scott DeVault, E-Performance marketing manager from Porsche Cars North America said the inspiration for the Brumos and Coca-Cola liveries came when the German manufacturer unveiled its ‘Pink Pig’ and Rothmans-inspired designs for the 2018 Le Mans 24 Hours that honored the 70th anniversary of the company.

The success of that project got the marketing team at PCNA thinking about a unique way to celebrate Porsche’s milestone, as well as IMSA’s impending anniversary celebration. 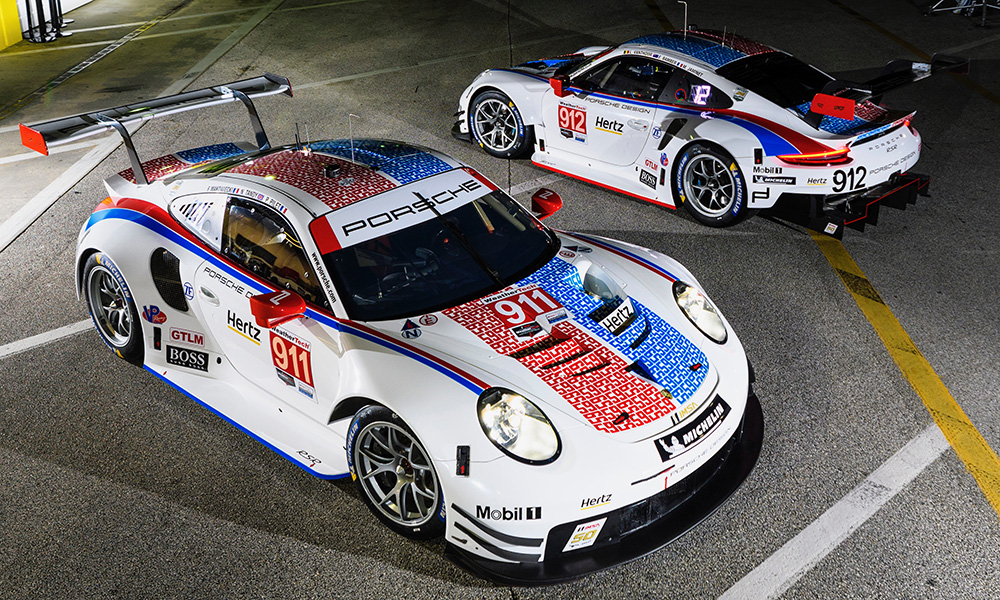 Brumos Livery Took On “Life of its Own”

The first concept to hit the track came in October 2018 at Motul Petit Le Mans, where the CORE autosport-run Porsches sported Mobil 1 liveries akin to the one that adorned the 1998 Le Mans-winning Porsche 911 GT1-98.

Even before that livery hit the track, plans were in motion for the rollout of two more iconic schemes the following year.

“Our initial meeting took place at Rennsport in September 2018, where we discussed the Mobil 1 GT1 livery and more long term concepts for 2019. As soon as that was decided, we knew the upcoming year would be IMSA’s 50th anniversary and we wanted to help celebrate.” DeVault told Sportscar365.

“Brumos immediately came up since that name is so iconic in the Porsche conversations in the world that it made so much sense.

“I remember the first design that was sent over using the 59s in the red and blue stripes, I think we all just started running in our respective directions trying to make this bigger.

“But it just started taking on a life of its own after Brumos and into the summer months into October at Petit.”

“When we discussed the idea, we had 10 or 12 livery ideas and two really stuck out to us,” continued Bartlett. “One was the Brumos livery and the other was the Coca-Cola livery.

“I think overall everyone unanimously thought Coca-Cola was perfect for Road Atlanta. It just fit together with the theme of PCNA and Coca-Cola being based in Atlanta where the race was taking place, and also there was so much that we could do to activate around that.

“With it being so recognizable globally we saw a lot of potential in that.” 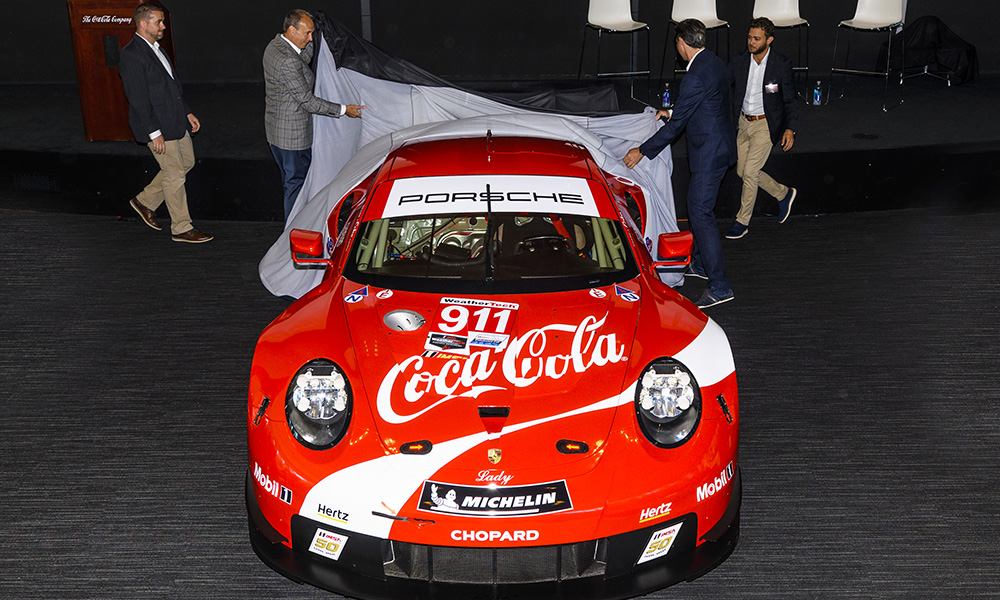 The Brumos livery came together quickly, having been unveiled at a press event in the garage at Daytona after the cars went through an overnight transformation from standard livery into the evocative red, white, and blue of the famed Florida race team.

More challenging was connecting the many dots needed to bring an international corporation on the scale of Coca-Cola on board for the season finale at Michelin Raceway Road Atlanta in October.

“Before we even had the Brumos livery on the car for Daytona we were already working and focused on the Coke livery because it was going to be a unique challenge,” said Bartlett.

“That’s not because people didn’t want to do it, but as you can imagine with a corporation as large as Coca-Cola, there are a lot of boxes you have to tick before you can put the logo on the car.

“It wasn’t just the livery itself. It was more work involved in the merchandise that went along with it. You have things that you’re selling or giving away so there are a lot of contracts that go along with that.”

Bartlett revealed they had pitched the concept to Coca-Cola shortly after the Rolex 24, owing to the “really long” lead time needed.

“It was really cool because they were so excited about the idea,” he said. “I’m sure they get pitched stuff all the time, and they’re such a large corporation, but it really didn’t feel like that.

“They loved it, they were all in… whatever we needed from them. They fully understood the history.

“But it was definitely a nine-month process of putting together the concepts, the agreements, the merchandising, because it’s two big corporations, two big ships you need to steer in the same direction to bring it together.” Both Bartlett and DeVault said they were blown away by the reception to the project.

“Any time we’re thinking of something like this it can always be seen negatively by some person at some time,” DeVault said.

“But to have insiders and enthusiasts who have been around the sport for a long time, and then you have other folks in that maybe have no interest in motorsport or endurance racing, to have all of those people at the same time, in the same room, hear this idea and build onto it, we knew we had something special really early.

“It grew and grew and grew until we had the official unveil of the car at Coca-Cola headquarters, which personally and professionally is one of my fondest memories.

“It was amazing to see it in front of 300 or so employees at Coke. Then to see it actually race and take the drivers’, teams’ and manufacturers’ titles at Petit was the perfect culmination.

“I’m not sure the internet has ever wholly agreed on something, so to see the vast, vast, overwhelming majority of comments be positive is something really, really rare.”

“The overall fan reception was really cool,” added Bartlett “On site, we had a pile of foam fingers outside our hospitality just to give out.

“We thought we had more fingers than we’d ever need in our lives, but within two hours of putting these things outside our hospitality people were snagging them up.

“We had guys from a competitor, a factory team within the GTLM class, walking into our hospitality on a practice day, fully decked out in their team gear, asking for Porsche foam fingers.

“Erin Cechal, our team PR person, said during driver introductions one of the big-name prototype drivers came up to her and asked her if she had any more Coca-Cola hats. The reception, even by our fellow teams and drivers, was huge.

“We had a lot of fun with it and I think everyone else did as well.” 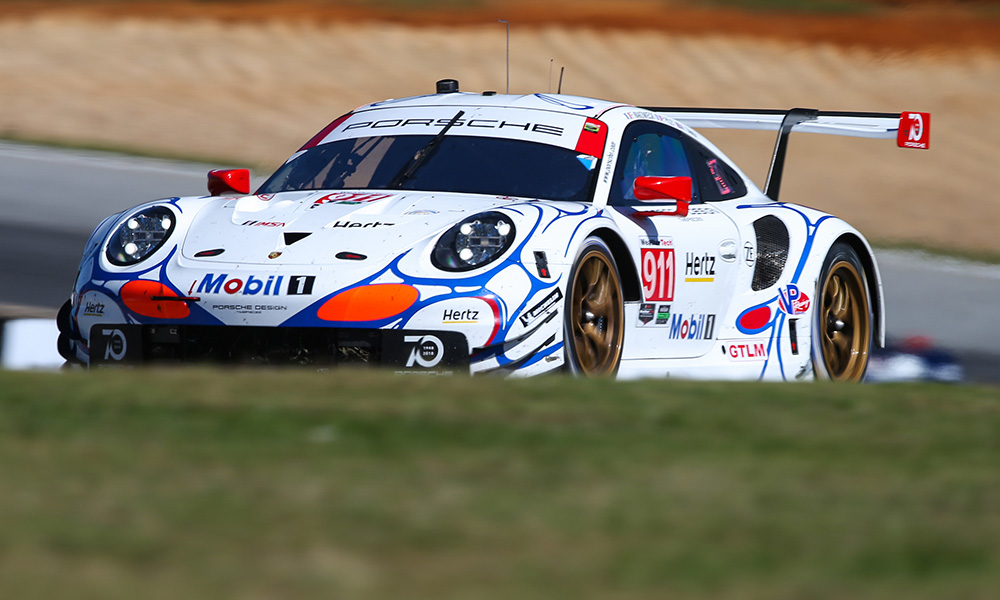 No Plans for Additional Throwback Liveries

For fans of the throwback schemes, 2019 will be a year to savor with no current plans to bring them out of retirement again in the near term.

“I think for my side we had a pretty strong talking point getting into 2020 with the new RSR-19, so that’s top of mind and the next chapter,” said Bartlett. “The retro liveries are fun but they also have to serve a purpose.

“They have to be meaningful, and obviously with the look back on 50 years of IMSA and the 70 years of Porsche, they made sense. I think what’s special about them is you’re not going to see them all the time.”

Fittingly, in the process of recognizing some of Porsche’s motorsports history the throwback cars have become a part of history themselves.

The Mobil 1-liveried 911 RSR from 2018 currently belongs to a private collector, however the other two reside in public exhibitions.

The Brumos-liveried No. 911 is now part of the new Brumos Collection in Jacksonville, Fla, while the Coca-Cola car is at the Porsche Museum in Stuttgart.